As the summer days wind down in Duluth, we’re hoping for a few more weeks of the things we love. Warmer temperatures, sunshine, and green grass.

Even our animals that don’t go outside love the summertime.

I’ve mentioned enrichments before, but I’ll touch on them again. Enrichment is defined as a dynamic process for enhancing animal environments within the context of the animals’ behavioral biology and natural history. Environmental changes are made with the goal of increasing the animal’s behavioral choices and drawing out their species-appropriate behaviors, thus enhancing animal welfare.

Yikes, in other words, enrichment gives the animals something to do. In the wild, an otter would slide on snowbanks, dive into rivers, and swim in lakes. They hunt for all of their food, expending lots of energy, they play, sleep, and cuddle. Our goal is to do as much enrichment as we can.

I give Anang enrichment at least three times per day. For example, yesterday morning I gave her shrimp scattered around the exhibit, and then a small piece of honey comb. She could smell the shrimp and had to look for it. Then, she sniffed the honey comb. What is the purpose of that? Well, it’s a different smell, texture, and taste. (3 enrichment goals in one!) ANYTHING different is enrichment, even if she doesn’t like it or play with it. It still makes the exhibit different in a little way, and that is good! At bed time, she got two molted Leo feathers and a small cardboard box with meal worms in it. (Anang LOVES feathers and she really LOVES meal worms!) So, what did I give her at lunch? SOD! Yep, grass. Anang loves anything that she can roll in (sand, dirt, grass, wood shavings, etc.). 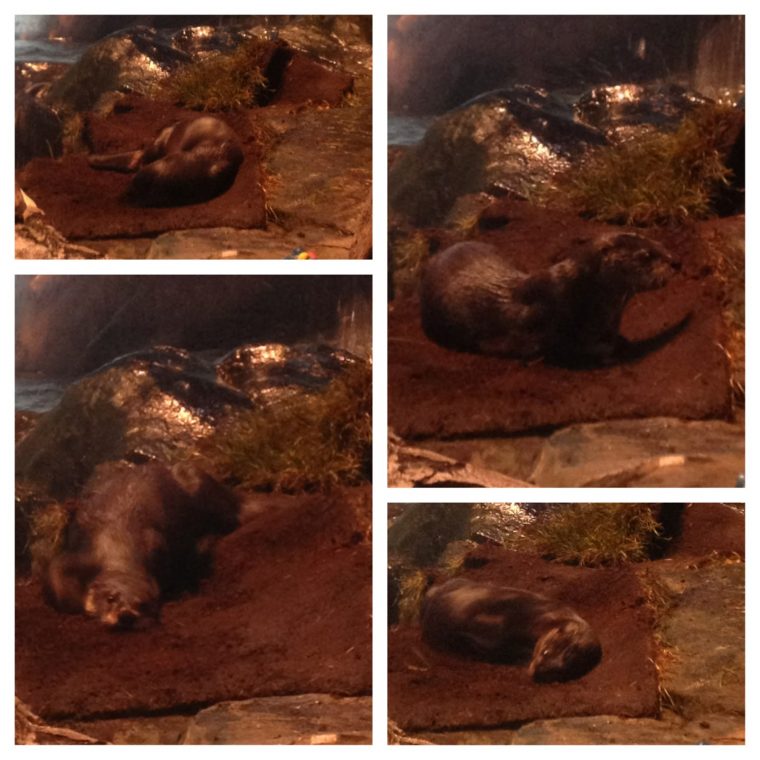 It was so great. I took a few pictures and a short video. Unfortunately, I wasn’t quick enough to capture the first thing she did… she went underneath!

After about 20 minutes, I called her back into the holding area so I could remove the sod from the water. She tried to flip it over to play on the dirt side, so in doing that, she pushed it into the water… So, I flipped it for her! Then, I let her back out.

And, this is what she did for about ten minutes.