July 17, 2013
Losing any part of your family is hard. Losing Clyde was especially hard. He didn’t fall into the category of a pet, but he certainly wasn’t just an exhibit animal. I will speak here for myself, as his keeper, but I know that there are many others here that feel the same way. He was family. He was an ambassador to his species. He was an educator. He was all that and more.

(Firstly, you are probably wondering, who on earth is “Clyde”?. Well, I have only known our sweet little boy otter as Clyde. Zhoosh is his stage name. Clyde was given to him by the rehabber who worked with him when he was tiny. Now that we have cleared that up…)

Anyway, watching anyone you love get sicker and sicker is hard. Since April, we’ve been struggling to find out just what exactly was wrong. He just stopped eating carrots, then his cat food, pretty soon smelt, then capelin. We took him to the vet multiple times. The first time we found pneumonia. What? How does an otter get pneumonia? Yep. Our vet always said she thought it was secondary to something else…but, what? Finally, after a Friday night rush to the Emergency clinic (where we saw drastic improvement of his pneumonia), weeks of getting better, then weeks of regressing, we took him to the University of Minnesota Small Animal Hospital. It is like the Mayo Clinic for animals. (It’s awesome!) They did a CT scan, endoscopy, radiographs, blood work, and physical exams. They thought he had Irritable Bowel Syndrome, even though it has never been seen in an otter before. Our vet thought cancer. The treatment for both incurable diseases was the same, prednisone. So we went ahead with that.*

This is a screen shot of his CT scan. Neat!

Once we started that, he was his old self again. It was GREAT. I am so happy the meds gave him, and therefore he gave us, three awesome weeks of loving life. He spent them playing vigorously in the water followed by sleeping. His last days went by quickly, those too were spent playing, and we were still able to get his medicine into him. We didn’t know the end was near until just before, so we think he was comfortable in his last moments.

He was a sweetie. We also called him “scaredy-otter”. And he was so fun. He was such an important part of my family. He had this look in his eyes, almost as if telling you he understood.

The only way to really see how wonderful he was is by pictures. I hope you can at least get a small glimpse of what he was like and what it was like to know him. 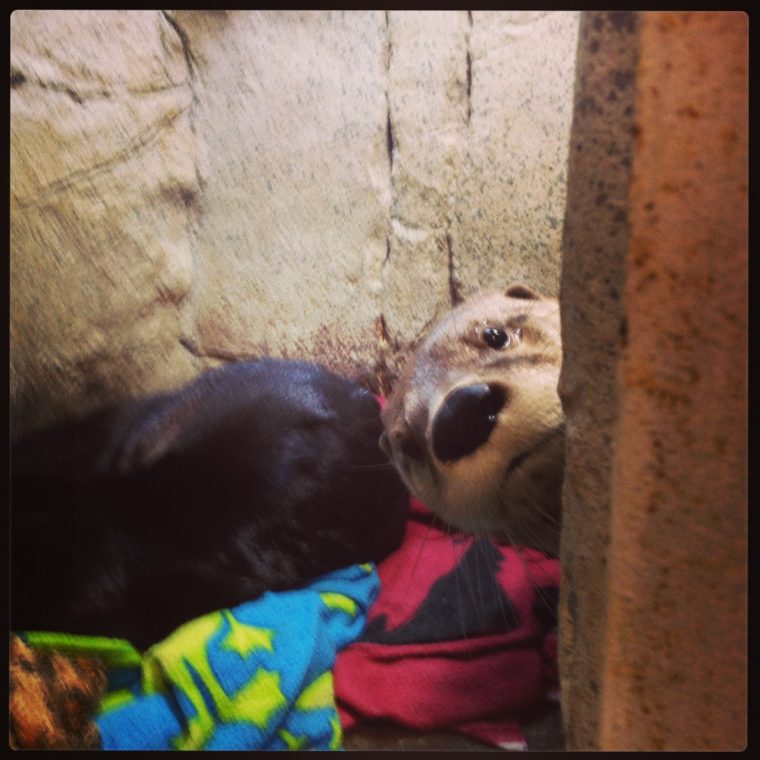 We plan to hold a small memorial service for him and anyone who would like to say good bye. Please check our website and Facebook pages for updates on when that will take place. The details are still in the works.

*Editor’s note: The medical care provided to resident animals is very thorough. Information about this care is not always available to the public while an animal is being treated. We are sharing this information here as a way to highlight the high level of care the animals receive at the Aquarium. It was important to us to provide a glimpse into this particular situation to help people understand and come to terms with this loss. It is our mission to provide the best possible care for all species. This includes working with specialized veterinary professionals. We even have a fish vet!

Category: Otters
« Fire, Ice and the Display of a 500 Pound Turtle Fossil Watching over Anang »