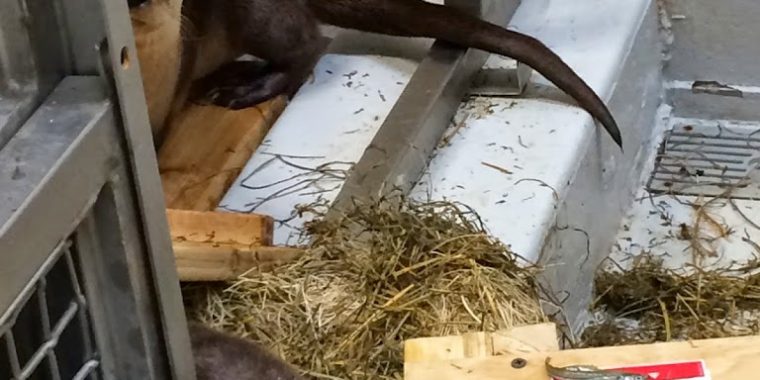 April 3, 2014
The staff at the Great Lakes Aquarium is excited to tell you that we have two new resident North American River Otters!
These two otters have come to us from DuPont, Louisiana. Together, they were trapped in a crawfish farm by a local trapper. They had been eating the crawfish at the farm, and had become nuisance animals. North American River Otters are not endangered or threatened, so in this case, these two otters would have been lethally trapped. Another man paid the trapper to live trap them and then he brought them to his space, where he holds otters until they can be placed in a zoo or aquarium setting. Demand for North American River Otters is high, so he holds them usually only for a few weeks. 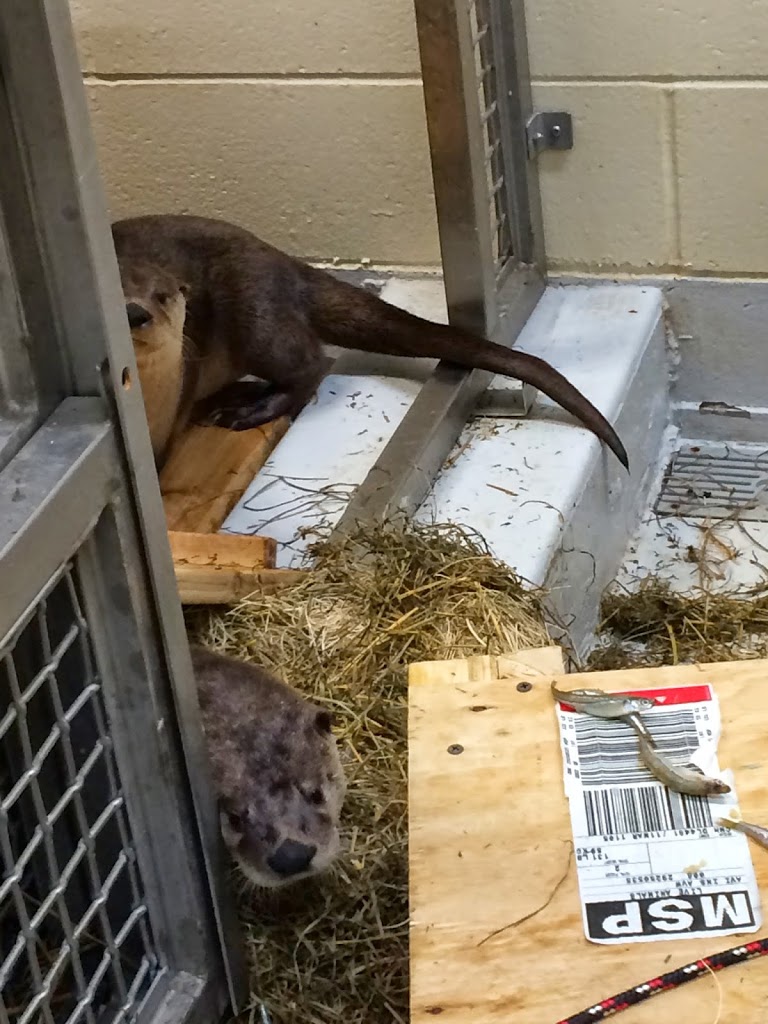 (This is shortly after we got them. You can see their transport crate with the MSP label on it!)
We found this man through an otter specialist, and he came highly recommended. Other well known zoos and aquariums have also gotten otters from him.
(We had put out a request on the official list for placement of any otters that needed a new home, and we had also contacted many, many wildlife rehabilitation centers and individuals. Last year, we heard of only two otters (in the US) that were rehabbed and placed in captivity; all the rest were released! That is great, and the point of a rehabber.)
Within only two weeks of contacting the source, Heidi (the curator) and I were headed down to the Minneapolis-St. Paul International Airport to pick them up. They were each in their own wooden crate, with holes along the top for air flow, but very little visibility. That can be scary for an animal that has no idea of what is going on. A gentleman with a forklift put them in our van, and we got on our way.
Upon arriving to the Great Lakes Aquarium, we unloaded them onto a cart and wheeled them inside our holding area. We weighed each crate with the hopes of getting a weight for each otter once we could weigh their crates, eventually.  We placed a few piles of fish outside their crates and then pulled the doors off. We left the room and watched from behind the window. They came out within a few short minutes and ate right away. Then, the took a few drinks of water and explored their surroundings.
Heidi worked with them alone for about a week so they would get used to her coming in with food and not being too scary. She fed them 2-3 times per day. Then, once they were ready to eat right through the bars of their area, I started helping to feed, too (it is much easier to each feed one otter!). 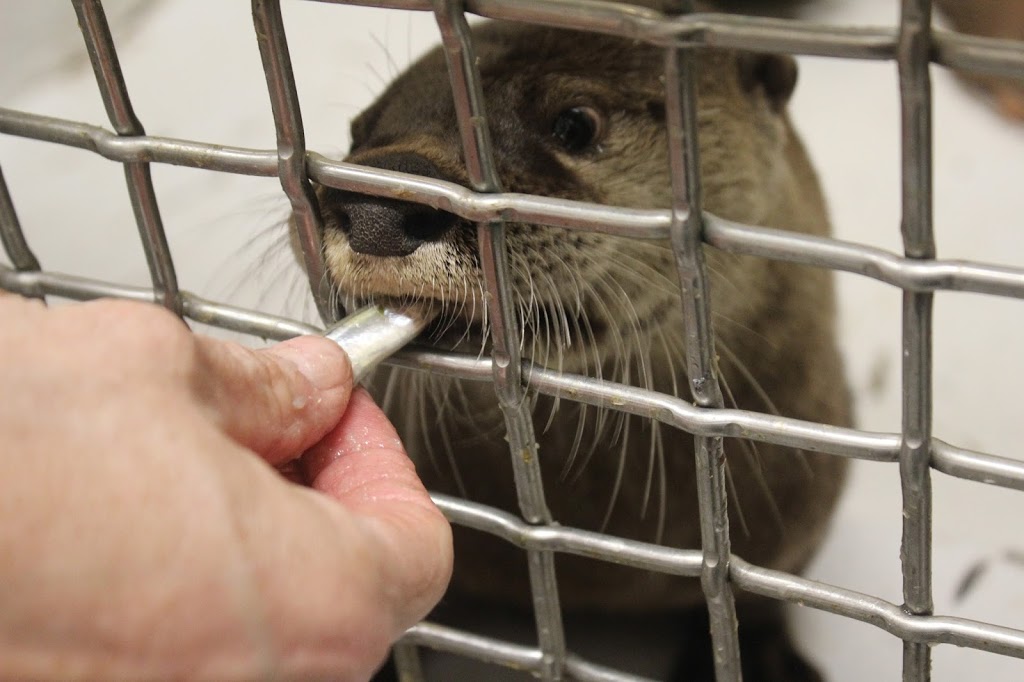 (Curator Heidi is feeding one through the bars of the holding space.)
It is really important with any new animals, including our pets, to earn their trust. We wanted them to know that they are safe here and we won’t hurt them. We let them dictate the speed at which we work. It took until day 8 for me to start feeding with Heidi because the day before they showed her that they were starting to trust her by eating from her hand or coming right up to her on the other side of the bars. They also have each chosen their “station” of where they want to eat, and they will go there every time we go in with food dishes. This is telling us that they know how to learn and how to target. We will target train them so we can build on that basic training. (Target training for an otter means we hold a target and when we ask them to target, they put their nose onto the target.) If they respond to target training, they can be targeted to a scale, into a crate, or to move elsewhere. When they are ready to go inside a crate and have the door shut, we can move them upstairs, to the holding area off the exhibit. They  will dictate the speed at which everything is done.
So, you are probably wondering what they are like, how they look, and all sorts of things about them! Firstly, we are told (by the man who kept them until we took them), that he thinks they are both females. At this point, because it isn’t breeding season, if one is a male, we won’t know yet. Also, their thick fur and skin folds prevent us from determining their sex clearly. So, at first I was calling one “the brave one” or “Clyde junior”. She looks a lot like a mini Clyde! The other one is more shy and took a few days longer to warm up to us. I call her “the shy one”. But now, it is almost hard to tell which one is brave and which one is shy! But, one (the “shy” one) is a bit darker, just a tiny bit, and has ears that stick out a bit more. She also has beautiful white, sharp, large teeth! The other one has smaller teeth. (We are hoping to use their teeth to help determine their ages.) They love to eat! They are still getting used to toys and blankets, but they like to carry straw around, make beds, and a huge mess! They are already really comfortable in their space! 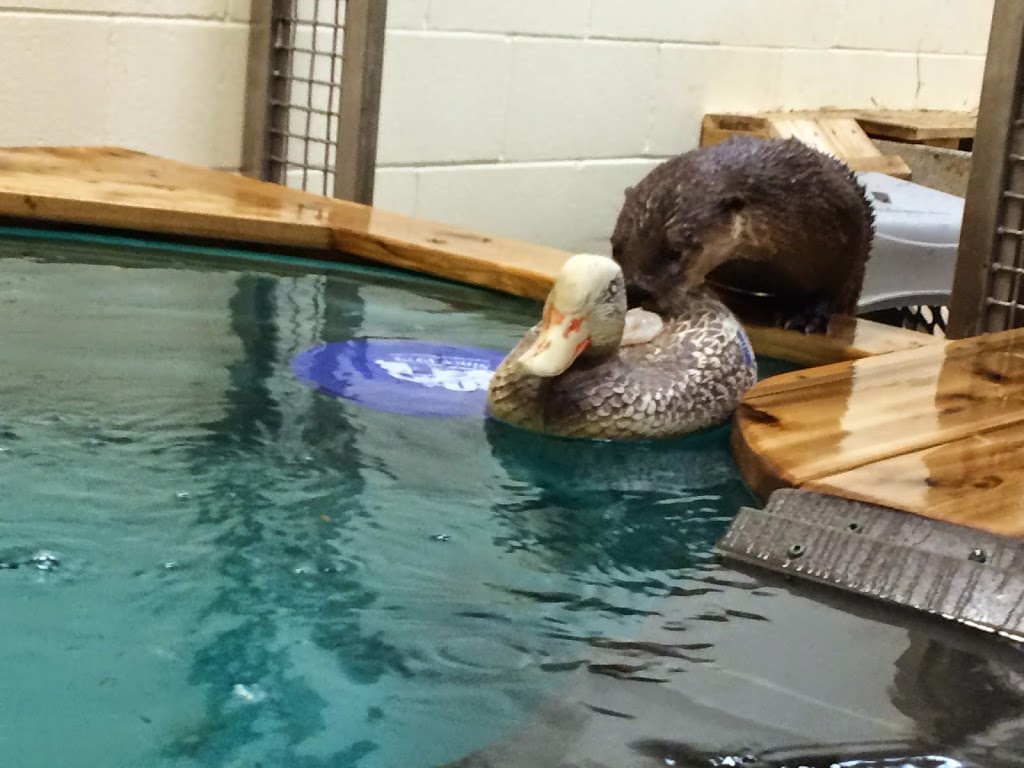 (This is the one that was more shy at first. She is getting a shrimp off of the plastic duck toy.) 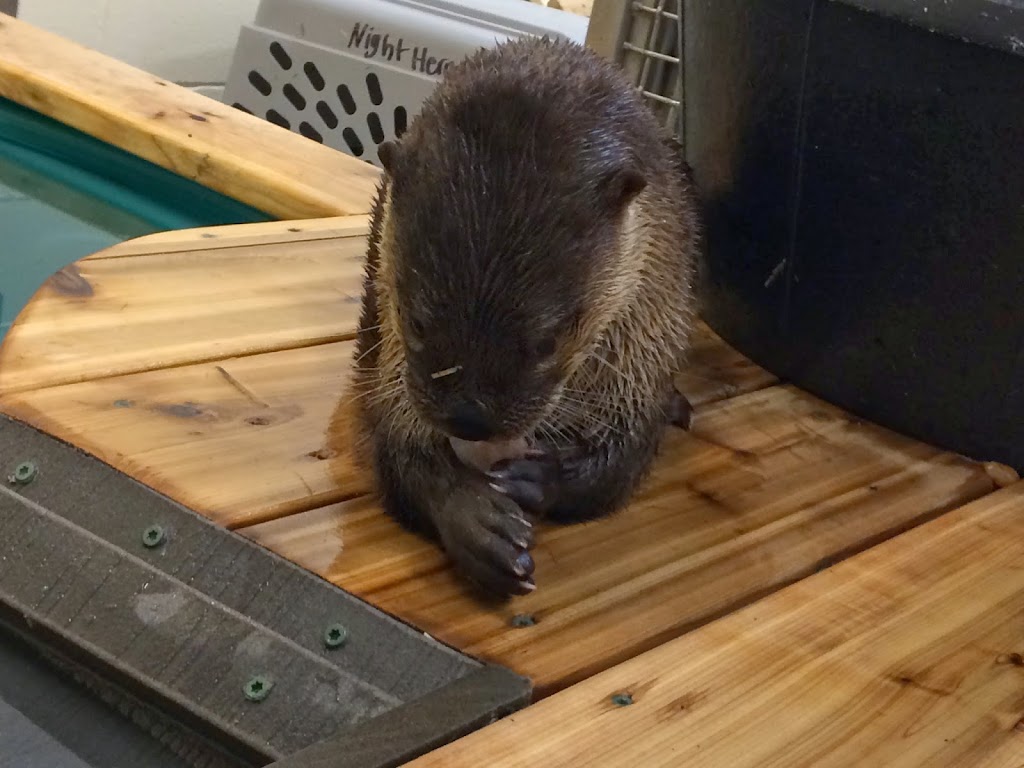 (This is the one that has always been a bit more brave. She is eating a shrimp.)

We hope to have some sort of public naming contest or public participation in their naming. Most likely, we will start after the public gets to see them on exhibit. To keep up with the latest information on how they will get their names, please check our Facebook page, our website, or future blog posts!

And, as the time draws near to when they will make their first appearance on the exhibit, we will make sure to get the word out as much as we can so everyone can come see them!
We hope you are as excited as we are to welcome them to our facility!
Category: Uncategorized
« The Road to Otter Health, part III Anang’s Retiring! »