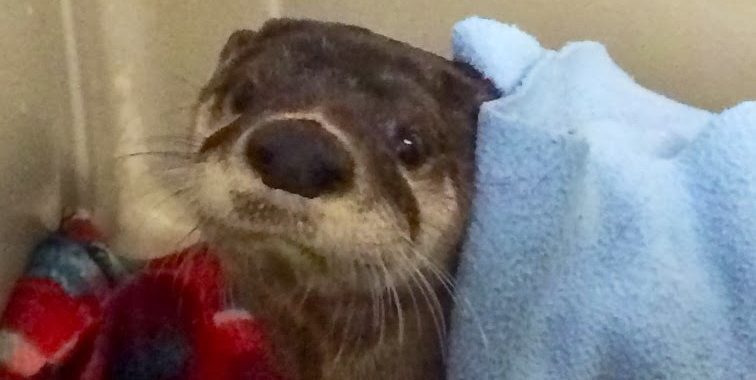 (Editor’s note:  Anang the river otter is often called Haley by Aquarium staff.  It is her nickname and the name she had when she arrived at GLA more than a decade ago.)

When the vet came back from looking at Haley’s x-rays (which we do routinely at each exam, especially since she has arthritis), she simply stated “She has a fracture in her fibula.” Curator Heidi and I were so surprised! Sure enough, you could see a little fracture in that tiny bone next to her tibia.

Well, let’s start from the beginning. About a week before her vet visit, we noticed that she seemed a bit lethargic, and she didn’t always have a good appetite. We did a fecal exam (just like your vets do for dogs and cats) to rule out any parasites or large amounts of gut bacteria. We always do those first to make sure it isn’t something we can simply medicate for without sedating her. It came back normal. When after a few days she didn’t seem to be feeling much better, we decided to make an appointment at the vet.

This is where her training comes in really handy. She is VERY smart. She hates going to the vet, and we never force an animal to do anything…so we let her decide if she will go in her transport crate. She didn’t want to, so we tried again last Tuesday. This time, she went in willingly, but was still surprised when I closed her in.

Anyways, we did a routine check of her entire body, just like a regular checkup. And, all of her teeth look great (you know when you have a sore tooth? They can REALLY hurt.). Her joints moved well, her organs felt good, so then we moved into x-ray. She has arthritis in her back hips and knees, and has for most of her adult life. So we expected to see that on those x-rays. We also look for any other abnormalities in her body cavity or kidney stones or anything else.

We did NOT expect to see a little broken fibula.

Obviously we can’t put a little cast on it! She’s an otter and otters LOVE water. We were so happy to hear one of our vets say that she has the best brace we could find, an intact tibia! Phew. That is great news! So, the recovery means rest and relaxation for that leg.

While she does in fact love her bed and blankies, she also loves to swim and play. That means we have to confine her to a smaller space to reduce her movement. She is now in her holding area where she can’t climb around, therefore putting less pressure on her back legs. She sometimes likes to wait by the door to go out on exhibit, but then sees her fresh pool and realizes she has to stay in back, and goes for a swim or plays with her toys.

We still give her enrichment and things to do. This morning, she got her favorite stuffed animal, a large gorilla puppet. She loves to groom him and cuddle with him. 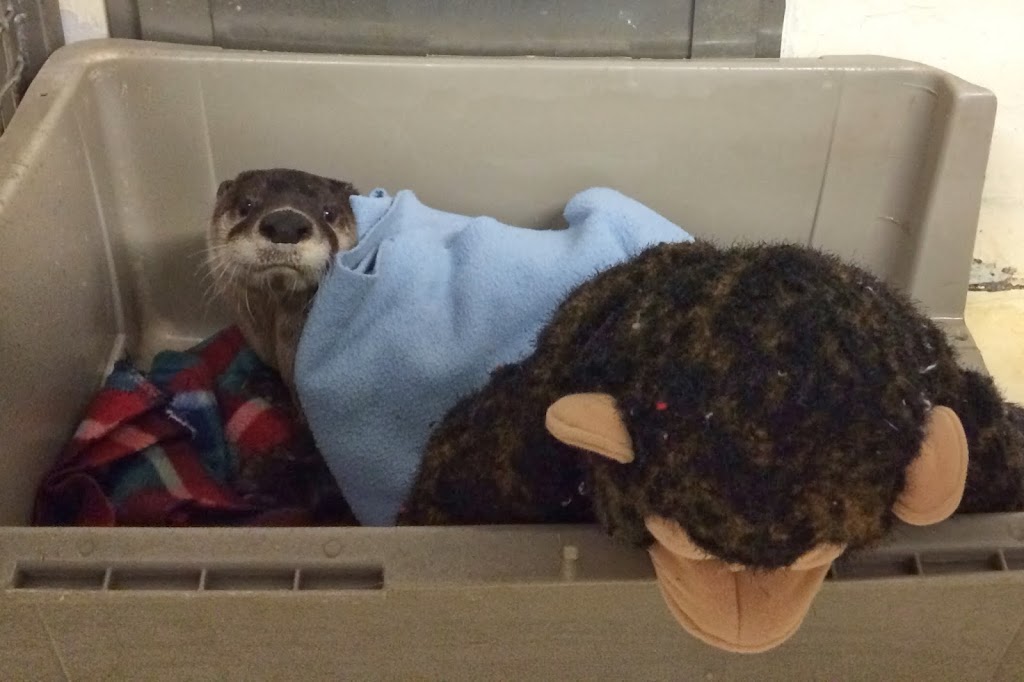 This is her in her half dog crate with two blankies and her gorilla.
She seems pretty happy burrowed under those fresh blankies!

We also switch out her beds (crate, fire hose bed, dog beds, etc.), give her leaves, straw, and branches, and lots of other things.

Stay tuned for upcoming blogs on Haley.  I’ll try to get some videos of her playing with enrichment!